This article was written by Hala Sefil, a Yazidi survivor and SEMA member from Iraq. The original text in Arabic can be found below.

On August 3, 2014, ISIS fighters, or the so-called Islamic State, attacked the Shingal area (Sinjar), located in the west of Nineveh Governorate in northern Iraq, 80 km away from the city of Mosul. The organization forced 130,000 Yazidis to flee to the areas of the Kurdistan Region, and with nowhere else to seek refuge, tens of thousands of them were forced to seek refuge in the Sinjar Mountains for fear of ISIS under dire conditions. At least 1,700 people died due to a lack of water, food and medical equipment. ISIS killed thousands of men, children and the elderly as they invaded the judiciary, and they tortured nearly 4,200 girls and women, who were enslaved and sold in slave markets. The organization committed violations against the Yazidi community on a large scale, including forced conversion to Islam, separation of families, the enslavement of women and surviving children who were considered “spoils of war”, and the recruitment of young children who were forced to fight in their ranks.

The Islamic State of Iraq and the Levant (ISIL) captured the Yazidis who were fleeing toward the Sinjar Mountain in the village of Qani on August 3, 2014. They separated the women and children from the men and took the men to a valley near the village where they were brutally executed and dumped in four mass graves and two killing sites. About 400 people were killed or kidnapped in the village of Qani.

On Tuesday, June 28 this year, a ceremony was held to open five mass graves containing the remains of the people of Sinjar and the village of Qani, east of the Sinjar district. Those remains will be transferred to Baghdad for identification and then returned to their families in Sinjar for a burial ceremony.

Hala Sefil, a Yazidi survivor and human rights activist, commented, “After a lot of advocacy that lasted for many years, five mass graves were exhumed in Qani village, out of 80 mass graves in Sinjar district. Excavations were carried out in the presence of the victims’ families and a large number of members of the Yazidi community, but unfortunately, in the absence of government representatives, that was one of the most difficult days in my life because those cemeteries contained the remains of my family, including my brother and my father. There should be a special cemetery for these remains and for the victims of the genocide. About 106 people were martyred in the village of Qani by the terrorist organization ISIS. The opening of these mass graves shows the world the extent of the genocide that the Yazidi community has been exposed to. Unfortunately, and although there are hundreds of mass graves in Iraq, there is only one team working on excavating and opening mass graves. That’s why the team works very slowly and cannot continue without adequate support. It is worth mentioning that this team is working to open mass graves in the village of Qani with the support of humanitarian organizations, not from the Iraqi government.”

You can read more about it here or here. 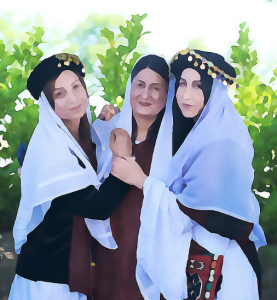