Since 2014, Ukraine has been enduring an armed conflict, with little indication of lasting peace in the near future. A December 2019 UK statement on the human rights situation in Ukraine documents ongoing violations, including crimes of sexual violence committed against detainees. Conflict-related sexual violence (CRSV) has been well-documented, most often in the context of deprivation of liberty. Men and women on both sides of the conflict are victims of CRSV, primarily with the aim of extracting information or confessions.

Women and men held in illegal detention facilities were victims of or witnesses to different forms of sexual violence, including rape and threat of rape; forced prostitution; torture with damage to the genitalia, or threats to commit such acts; attempts or threats of castration; threats of sexual violence against relatives; sexual harassment; forced nudity; and searches by individuals of the opposite sex, including full or partial exposure.

Sexual violence has often been used to punish, intimidate, humiliate and demoralise entire communities in order to obtain information or a confession. Because of the lack of rule of law and the dominant atmosphere of impunity and arbitrariness in the self-proclaimed republics, the level of sexual violence remains extremely high in the country.

CRSV in Ukraine is ongoing, yet lacks an adequate response. According to the 2018 UN Strategy plan, Ukraine has reportedly been struggling with the challenges around equal and fair justice. There is a failure to investigate sexual crimes committed in the context of armed conflict. The abusers remain unpunished and the likelihood of further exacerbation of the conflict remains extremely high. Police and military officials lack basic awareness about the issue of CRSV, nor do they have an understanding of how to prevent or respond to it.  Service provision is largely lacking and survivors have little to no access to effective redress and guarantees of non-recurrence.

The Eastern Ukrainian Center for Civic Initiatives (EUCCI) is a non-governmental, non-profit organisation established in Kyiv. EUCCI’s mission is to develop and maintain the ability of the Ukrainian society to face the challenges of our time based on the principles of democracy, human rights and the rule of law through education, advocacy and research.

Since the beginning of the armed conflict in Donbas, the organisation has been  documenting the gross human rights violations that have been occurring, namely crimes involving torture, extrajudicial killings and unlawful deprivation of liberty.

Furthermore, in 2019 EUCCI together with the Mukwege Foundation helped to establish a Ukrainian network of survivors of conflict-related sexual violence. Known as the Ukrainian Network of Women Affected by Violence (SEMA Ukraine), the network has members throughout Ukraine and, together, they raise awareness to the reality of sexual violence in conflict and fight for justice, recognition and reparations. 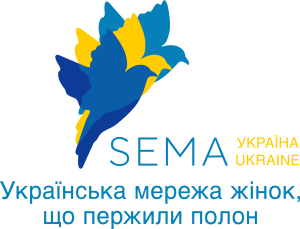